May we proffer a Mother’s Day tip?

Well what a busy a week – on all kinds of fronts! We hope half term has been good for all our customers who are parents, grandparents and other lucky ad-hoc child-carers.

So given many mums and grannies are already shattered, we can’t help but point out that Mother’s Day is fast approaching.

We reckon our sweet Naiive Mother’s Day figure has some pointers on what might go down well as a reward for all that hard-work that goes on during the year.

Tarquin designed this figure so we can attest that a bit of lie-in followed by breakfast in bed used to go down a treat with Biddy
– ‘specially with the family dog serving as hoover as all of us
piled in to their beautiful bed.

Well, back in the day when we were actually small enough for a morning cuddle that is! 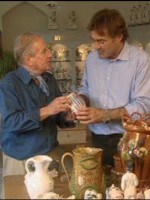 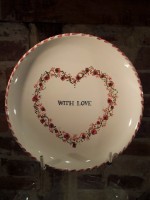 To be honest most of the roses we do here at Rye Pottery are more pink’ish actually. But well, our point is that there’s no getting away from it now we’re in February, Valentines is officially fast approaching.

While we’re always prepared for the last-minuters among our collectors with Rye Pottery vouchers, we also have two charming themed window displays here at our base in Rye if you’re looking for inspiration.