Prince George it is then 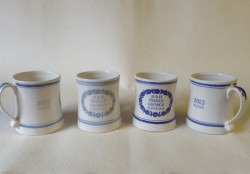 His Royal Highness Prince George of Cambridge – A great name choice from our perspective. Not only was it on our list of favourites, but it’s also short, which from a potting, lettering, design perspective is a jolly useful thing indeed!

So that means our beautiful hand-thrown tankards are now available. Our long-term collectors will spot that this latest Rye Pottery Royal Tankard features a design based on the pieces we produced to mark Prince William’s own birth back in 1982.

Our Prince George Tankards feature our two most popular colourways for our Royal Commemorative pieces – Cobalt Blue and Blue Green.

These charming little mugs are decorated with hand-printed (not digital) transfers and additional hand-painted banding and they are £18.00 each plus p&p

Do let us know soon if you would like to order one or if you pop into our shop in Rye you might even pick up a second.

Having said that our seconds don’t hang around long. Back in 1982, William’s maternal grandmother – Princess Diana’s mum – bought a second from our London shop in Connaught Street. So you see, it’s official, Rye Pottery seconds are fit even for a (future) king!

Well I fear we are not as quick as the Neapolitan Potter who already has his pregnant Kate & William figure on sale by Wednesday, but we are thinking hard of what designs we will  decide on in due course.

First and foremost though I feel we should all wait a while and give the poor girl time to overcome the dreaded morning sickness. I have huge sympathy with that problem having suffered from it for all of my darling children!

Radio Sussex rang up on Tuesday morning to ask what we would be doing, which caught me on the hop a little, though I am sure we will do one of our collectable small transfer tankards when next June/ July actually comes!

We’ll hope to add the audio of Biddy talking to morning show radio host Danny Pike soon but in the meantime you can listen via the BBC iplayer here.