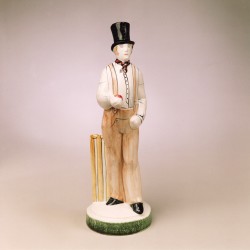 Rye Pottery is delighted to share in the 260th year celebrations for Rye Cricket Club.  There’s a whole season of events, not least the First Team hosting a special match against the LASHINGS WORLD XI on May 26th at 2.30pm on the Rye Cricket Salts.

We are very pleased that one of the prizes at this important fixture will be the presentation of a Rye Pottery Cricketer – The Rye Bowler – James William Lillywhite. As aficionados will know, he not only played for Sussex and England but Rye as well. Hence the fact that we paint him wearing the Rye Club colours!  He was also one of the founders of the famous Lillywhites Sports store in Piccadilly.

The figure will be presented to the Man of the Match – but will it be a big-hitting former superstar or a local Rye hero?!

The internationally renowned LASHINGS XI  always produce a very entertaining and exciting day’s cricket. The Harlem Globetrotter’s of the cricket world are picked from a squad of past & present greats – expect to see a host of star names including West Indian legend Gordon Greenidge plus Phil Defreitas, John Embury, John Lever, Saqlain Mushtaq and Yasir Arafat amongst others.

With a hosted lunch event in a marquee from 11.30 and live music after the game this promises to be a day not to miss.

If you are coming to see us in Rye, why not double up and catch some top class cricket too? Play starts at 2.30.