The end of a lifetime! 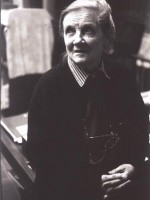 On October 9th Eileen Cole widow of Wally, died in her hundredth year. Tiny – barely 5 foot tall – blonde and very feisty, Eileen was Wally’s strength and support over 30 years at Rye Pottery.  They first met in 1930 as students at Woolwich Art School and never looked back.  During WW2 Eileen, plus small son Tarquin, found digs wherever Wally was posted in England, ending up finally in Farnham while he was with Army Camouflage based at Farnham Castle working on deceptions for the D Day landings.

In 1947 Wally was teaching part time at The Central School &  they moved into a small cottage in Winchelsea (by now with new baby daughter as well as teenage son), this allowed Wally with brother Jack to re-open Rye Pottery. Eileen soon found herself having to make pottery trugs, small vases and silk lampshades as well as manning the “Seconds shop”. After Jack’s retirement in the early 1960’s. they moved in to live over the Pottery and Eileen she took over most of the everlasting paper work as well.  In 1978 although officially retired, Eileen stayed on to man the shop on Saturdays so that Tarquin and Biddy could have week ends with their young family.

Once retired Eileen was able to give more time to her other great love – gardening.  She created a wonderful oasis of cool and calm behind the untidy Pottery development which had grown like Topsy over the years in Ferry Road. Active in Inner Wheel until well into her 90’s,  Eileen always loved a visit from old  friends & customers happy to have a cup of tea and discuss the good old days of Purchase tax and 3 day weeks!   We wish her peace and rest.

Our local paper ran an obituary, which you can read here.