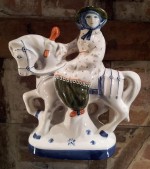 The Wife of Bath

Here at Rye Pottery we have a special interest in the enthronement of the new Archbishop of Canterbury, Justin Welby, to whom we send our very best wishes. We’ve supplied the shop at Canterbury Cathedral with our ceramic figures and tiles based on Chaucer’s Canterbury Tales for more years than some of us like to remember! We also produce a special tile of the Thomas a’ Beckett Tomb for the Cathedral.

But what some of our collectors may not know, is that Rye Pottery’s figures from Chaucer’s Canterbury Tales were born from a request by Canterbury Cathedral for its gift shop in the early 1970s.

Mr Steele who launched the shop, introduced us to sculptor and painter Gordon Davies and suggested we should work together to produce something featuring one of the pilgrims – The Wife of Bath. Discussions and then work ensued, and lo the Wife become the very first in a what is now a series of 38 ceramic figures based on Chaucer’s Pilgrims. And the rest as they say is history!

Gordon went on to design our Rye Nativity too and in the year 2000, then Archbishop George Carey took a complete set of the Rye Nativity to Jerusalem as a gift to mark his Millennium visit.  We recently heard from a Rye Pottery collector who had seen it on display out there but sadly his camera had failed him at the crucial moment.

So we’ll always be grateful to Canterbury Cathedral and its inhabitants, not least to Mr Steele for introducing us to Gordon, who did a great deal of wonderful work at Canterbury over the years, as well for us here at Rye.