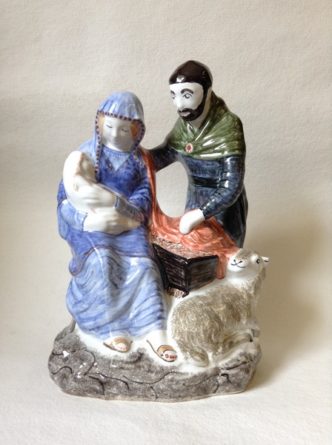 The Nativity central scene – Mary & Joseph with their newborn baby.

This is our take on a classic collector’s piece – The Christmas Nativity and the great story of the birth of Jesus. A sensitive, simple and touching scene depicting two proud parents gazing down at their tiny child in wonder.

Joseph’s arm rests protectively around Mary’s shoulders, with a cosy blanket at the ready and a sheet at their feet to represent the stable. Mary’s beautiful robe and headdress show off our decorating team’s talents as the folds are delicately emphasised in both Cobalt and Delphinium Blue.

Rye Pottery’s Nativity has evolved over several years. The first of these ceramic figures was born when we asked sculptor/potter Gordon Davies to design a Mary & Joseph figure for our American customers. (We first collaborated with Gordon to produce our first Chaucer figure – The Wife of Bath for Canterbury Cathedral – read more here)

We later realised there was considerable interest in the idea back in England, so we persuaded Gordon to add the Three Wise Men or Kings and later three Shepherds to create what we feel is a charming and sensitive Nativity Collection. Some of collectors also enjoy adding additional animals, not least our Donkeys and Sheep here.

In 2000 a Rye Nativity set was taken to Bethlehem to mark the Millennium by Lord Carey, the former Archbishop of Canterbury.

Please see the thumbnails for full detail and the other characters.