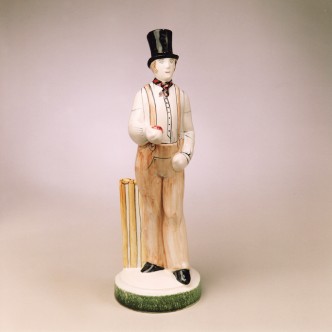 The first of our Rye Pottery Cricketer’s, designed in 2002, is The Bowler.

Shown wearing the Rye colours of red & black he is modelled on William Lillywhite, who played for England, Sussex and Rye!

The second of our Cricketing figures you can see if you click here, The Rye Batsman, who is based upon Fuller Pilch of Kent, Sussex & England.

Widely recognised as the greatest Batsman of his time and the greatest to have have played the game before the subsequent emergence of W.G. Grace