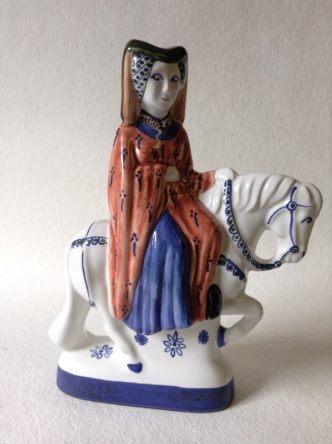 The Guildsmen & their Wives – The Guildsman’s Wife

Chaucer mentions the specific Guilds in his prologue: They had the capital and revenue,/Besides their wives declared it was their due./And if they did not think so, then they ought;/To be called Madam is a glorious thought.

Chaucer does not actually tell us that the Guildsmen had taken their wives with them on the Pilgrimage to Canterbury, but he does describe them rather well. So we have chosen to assume they went too, as it allows us the fun of having more than just 2 women in our Collection.

To be called madam is a glorious thought,

The Guildsman’s Wife is shown wearing a similarly patterned coral dress to her husband’s tunic, along with a n incredibly decorative wimple head dress, that is somewhat hard for our decorator’s to paint.