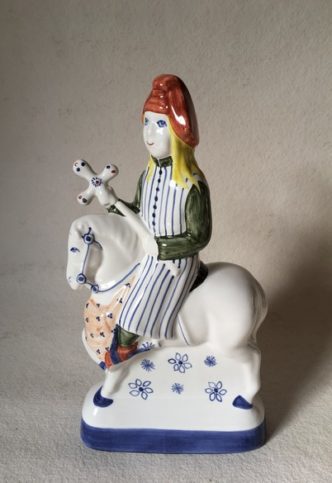 This Pardoner had hair as yellow as wax,

His chin no beard had harboured, nor would harbour,

Smoother than ever chin was left by barber.

The Pardoner with his rather swarthy partner The Summoner,  gave us the only chance to include a new colour: his lank greasy Yellow hair. Though might say we’ve been too kind to him!

To offset some of the more solid coloured tunics we also  gave him a striped finish which makes him a little more feminine as well as  showing off our decorators’ skills – painting straight lines as if they are fabric is no mean feat.