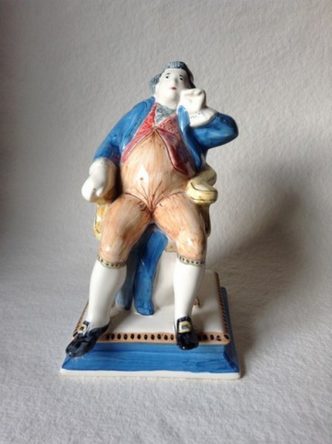 Introducing, Rye Pottery’s Prince Regent, or ‘Prinny’ as he was known!

Originally commissioned for his beloved Brighton Pavilion, we worked closely with them to create a truly Georgian figure that captured the essence of the famous Prince Regent who went on to become King George IV.

Inspired by images from the Rowlandson cartoon, The Prince of Wales along with his secret, and then illegal, Roman Catholic wife Mrs (Maria) Fitzherbert, are two of our most characterful pieces. Click here to see the wonderful Mrs Fitz.

We’re jolly pleased to be able to celebrate this extravagant, controversial but important artistic patron who has a particular affinity with Sussex. The painted detail on this piece is wonderful and the spirit of the original cartoons and the antics of the man himself are all captured in this striking but fun tribute. Its also a fabulous reflection of the sense of humour that we hope is present in all our work.