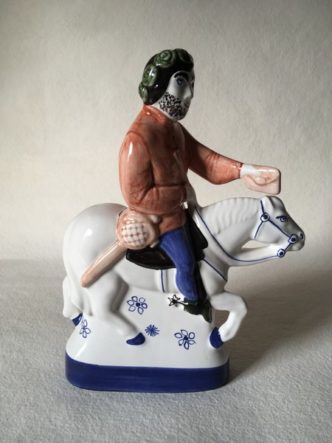 There was a Summoner, his eyes were narrow,

He was as hot and lecherous as a sparrow.

Black, scabby brows he had, and a thin beard.

Children were afraid when he appeared.

The very swarthy Summoner, the unlikely partner to the flaxen haired young Pardoner, did pose some problems over his decoration, we had to keep him within character,but also he had to be a welcome addition to the Pilgrims collection.

He has a rather frivolous green wreath around his head to offset the bristly cheeks, plus a large tan bag to carry the money he was paid,  as well as a sword and a stout stick for protection when he delivered his summonses.