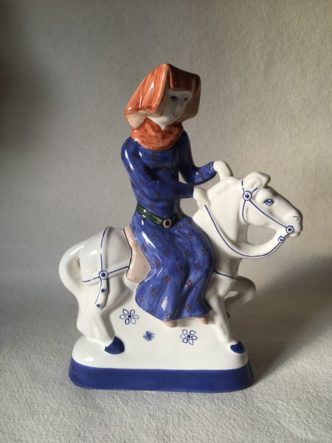 The Guildsmen & their Wives – The Weaver’s Wife

They had the capital and revenue

Besides their wives declared it was their due.

We think that perhaps The Weaver’s Wife ay have been very new to Guild life as she cannot quite manage to hold her head up like the other wives, or perhaps she is being coy!

Maybe the proud look of the Weaver and his hat over awed her so she settled for a softly simple patterned blue gown and buckled belt with a demure coral wimple. The understated spirit of this figure really shows off the decorating teams’ skill, as the brush strokes emphasise the incredible detail of fabric folds of the underlying sculpture.